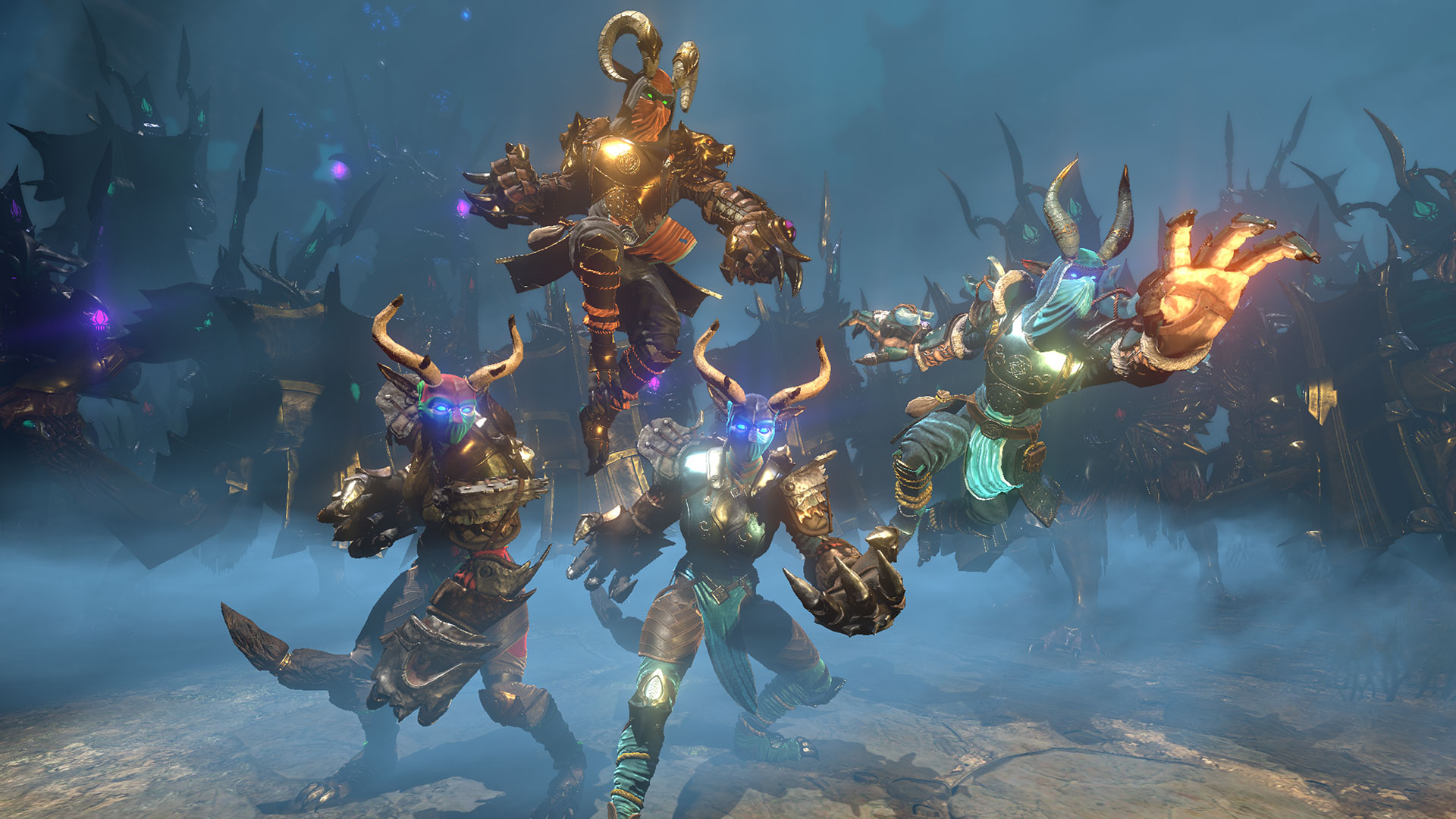 If you like Monster Hunter, chances are that you must have heard about Runwild Entertainment’s Almighty: Kill Your Gods. It’s an action rpg where players play as “Alpha Hunters” to slay the godly creatures. So while you slay monsters in Monster Hunter games, in Kill Your Gods, you will be slaying Gods!

Ofcourse, the game is not as simple as it sounds. Players will be gathering materials to improve their home island which can also be attacked by the enemies so players will also need to defend it.

To know more about the game and its early access, we had the chance to talk with the game director, Darran Thomas of Almighty: Kill Your Gods. We asked him a few questions and following are his answers:

Q: The game feels a lot similar to Monster Hunter in terms of concept, what were your prime inspirations behind Almighty: Kill Your Gods?
There are lots of inspirations for the game that we have drawn from, Monster Hunter certainly is one of them in terms of hunting giant enemies, but also games like The Division and Infamous series had a bigger influence early on. We have less of a focus on melee than Monster Hunter and more of a focus on shooting. We also wanted a sense of scale, not just in the enemies but the size of the battles, as things can escalate from fighting a single enemy to an all out epic battle with numerous enemies attacking.

Q: Is there a proper campaign in the game or are there just missions/hunts which you can play solo or with friends?
Not at this time. With Early Access we are laying the foundations for the game world from which we want to build. So there are a number of Knowledge Quests that unlock lore in a deductive fashion that details out some of the backstory, but we wouldn’t call this a campaign. The Knowledge Quests are also used to introduce the player to some of the basic concepts of the game.These evolve into public event style quests that are designed to work in a multiplayer environment, and you can stack daily and weekly quests with them so you can complete multiple quests at the same time. You can do these on your own or with friends in a pack, and we wanted this to be as fluid a process as we could make it, without the need for sitting in lobbies waiting for matches to start.

Q: Can we expect to see PvP in the game? In future maybe?
It may be something we consider in the future as we wouldn’t rule anything out, but it’s not something we are currently focusing on. We did have designs early on for PvEvP aspects to the game but decided to focus on PvE as this is something that interests us most at the moment.

Q: The early access for the game starts on May 5 for PC. What about console release? Any plans for that?
We are working on console versions of the game but are not discussing platforms or dates yet, more will be revealed about this later this year. Our focus is to develop the game in Early Access, and respond to player feedback and see where that leads us in addition to some of the longer term content plans we have.

Q: How long do you guys plan to keep the game in early access?
We don’t intend the game to be in perpetual early access, so we will see how things evolve and what feedback we get from players. We are currently focusing on the next 3 months, optimizing, fixing and polishing features we feel need improvement and reacting to the feedback we receive. When we are happy we have hit the level of polish and quality required we will move out of early access and into delivering future content for the game.

Q: How many Classes are there for early access? How many do you plan to add after that?
The game doesn’t include traditional fixed classes, we have some example gear sets in there as an example, but we hope players will experiment and create their own character classes with the tools we have provided for them. You could create a healer or DPS build, but we are hoping players will create unique playing styles.

Q: How does player progression work in the game? How do the player characters themselves become stronger?
There’s a number of aspects to player progression, there’s traditional levelling that you gain through XP, there’s Health and Magic Power that you increase buy building your Tower of Might, there’s additional revenue you can generate by upgrading your Home Island, and then there’s the Gear you can equip your character with such as Power Gauntlets, Power Stones, Power amulets and Sigils you can inscribe on them. As the player levels up they can equip better gear, and they get access to new islands to hunt on.

Q: Can we expect to see crossplay between consoles and PC in future for Kill Your Gods?
Simple answer is yes, it’s something we are working on.

Q: Any plans to bring the game on PS5 and Xbox Series?
We are looking at all platforms at the moment.

Q: Do you think your game will be able to deliver 4K 60 FPS on new consoles based on their hardware capabilities?
We are still optimising the game so will have a better answer in a couple of months. To be honest we haven’t been focusing on 4k for Early Access and are focusing on getting the game running as best we can in HD.

Q: Is there any character customization (outfits etc) in the game, any character creator?
There’s a fair amount of character customisation and we will be looking to deliver more in the future. You can transmog gear items to look differently but still retain their stats, so you can customise your gauntlets and amulets. You can also change skins, horns, eyes, tails, and change your form to male or female.

Q: Do you guys have any plans to bring content like Raids in the game? The raids like in Borderlands 3 or Destiny?
We have raids in for Early Access but they are Raids where enemies attack your home Island that you have to defend against. You can do this with friends or on your own. The whole game kind of involves raids, you can set out to islands on your own or with friends and start looting in a sandbox style environment, You can trigger public events, make the gods angry and escalate the intensity on each island. It’s something you can do dynamically on the fly, so there’s no formal match making.