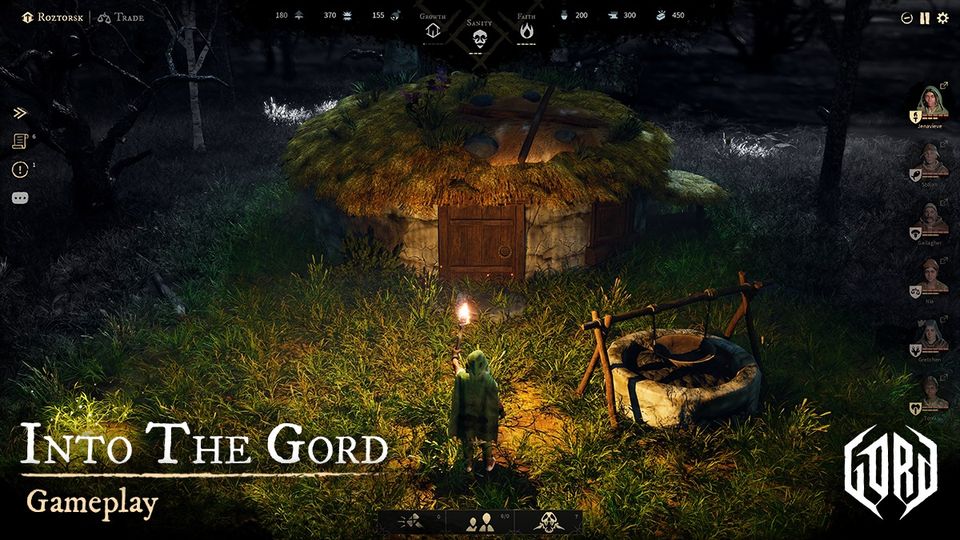 A lot experienced developers in our industry go independent to make their own games the way they exactly want them. Former The Witcher 3 producer, Stan Just is one of those veterans. He has formed a new studio Covenant.dev and is now working on Gord with a team of talented developers.

Gord was revealed recently as a dark-fantasy strategy game where players gather resources to develop their own settlement. The good thing about Gord is that the gameplay offers real-time exploration and combat so they can have a The Witcher 3 feel in there as well.

We had a chance to sit down with Covenant.dev CEO and Game Director Stan Just to talk about Gord. We talked about the studio, gameplay elements, inspirations, console releases and more. You can read the interview as such below:

Q: Let’s start with a brief intro. Tell us a little bit about Covenant.Dev and how many people are currently working in it?
Stan Just: Covenant.dev is my dream company. I was working for various companies for over a decade seeing what works and what does not. Given the chance to set everything my way I did not hesitate to experiment. That’s why we don’t crunch, don’t have core hours, work on laptops and discuss design of the game together almost every Friday. We’ve got 10 people working full time on Gord internally but there are several dozen more contractors involved in the project atm.

Q: From working for a big game developer (CD Projekt Red) to going indie, what was the prime motivation behind it and how has the journey been so far?
Stan Just: The main motivation was the need for further personal development. The best way to do that is to throw yourself out of the comfort zone and I did just that.
But yeah… it wasn’t all sunshine and rainbows. Working evenings and weekends alongside a full-time job and a pregnant wife was challenging. But I guess that’s the cost of going after multiple dreams at the same time so I never complained or regretted that.

My first game, done in cooperation with Vile Monarch, was met with mixed response from potential publishers so I needed to abandon it and consider all the private funds invested in it as sunk cost (still paying off those bank loans). Thankfully, Blite Fund saw the potential in me and agreed to invest some seed money which transformed eventually into Covenant.

Q: Let’s talk about the World of Gord. It’s Slavic Lore, right? But how dynamic the environment and the world itself going to be? Is it going to be an open-world? How will players explore the new parts of the world?
Stan Just:It is inspired by the Slavic lore but it is our own, original universe. It’s not an open world. The player transitions from scenario to scenario and each has their own confined area. In the Campaign those levels will be placed in the particular regions of the world and the player will transition from one to the next in a linear consecutive way. In the Custom scenarios the levels are procedurally generated so we do not disclose their world positioning and you transition simply by switching from one scenario to another.

Q: You are calling Gord a strategy game. However, players will be completing a set of quests to gather resources, right? So where do these strategic elements come into play?
Stan Just: Gord is a city-builder at its core. You will usually start by setting up your base and gathering resources in preparation for the adventures waiting in the wilderness. Then you scout the territory, visit some POI, loot everything on your path, fight some monsters and more. After such an expedition (all real-time) you probably will go back to the settlement to recuperate a little. Analyze what has happened to your subjects – how they handled the stress, what items they got and who gained the most experience. You build up your gord further and take on yet another quest. That would be a standard loop.

Q: Players will be able to use companions for the quests or each quest will only have the player alone?
Stan Just: There are multiple quests to take up. For each you can use whatever subject or subjects you see fit. They however do not transition in between scenarios.

Q: What was the prime inspiration behind the idea of Gord? Any examples you want to quote?
Stan Just: At first, I aimed to do something similar to Northgard but in a world similar to Witcher’s. After a while it turned out to be more of a Rimworld kind of experience with some mechanics inspired by Don’t Starve, Frostpunk and… (one of the greatest games of all time) Heroes of Might and Magic III. 🙂

Q: What happens when a player struggles to maintain the Village attributes like Faith, Sanity and Growth? Will there be a game over?
Stan Just: Growth is a simple indicator of your gords development. If you are low on that it just means that you don’t have a lot of structures built.
Faith is like mana. Having none simply prevents you from using Incantations – spells in the form of abilities with cooldowns.
Sanity on the other hand is the one to watch. If a personal Sanity bar (yellow one below the portrait) drops to zero your unit simply flees your rule with a scare chance of ever coming back.

Q: Since the game is single-player, how are you guys going to handle replayability? If a player starts a new playthrough, what changes can he/she expect so see?
Stan Just: Due to the fact that we are going to have procedurally generated levels and AI-managed side quests I expect there will be a LOT of replayability and experience versatility in this title.

Q: Is Gord going to release on other platforms other than PC?
Stan Just: We would most definitely like that to happen but for now we can commit only to the PC.

Q: Any price point you guys have in mind for the game?
Stan Just: This will be disclosed at a later date.

Q: Will the game feature real-time combat or turn-based?
Stan Just:: Real-time with an option to use active pause.

Q: For PC release, which digital platforms would you choose (Steam, Epic Games etc)?
Stan Just: Steam for sure. Others are still to be determined.

Q: Is there going to be an early access or Demo for Gord before the release?
Stan Just: This will be disclosed at a later date.

Q: Are there going to be character classes in the game or it will be the same single character for every playthrough?
Stan Just: There are over a dozen character professions and the player can ask each subject he controls to switch between them. Similarly to Northgard.

Q: Any message you want to convey to your fans, especially the ones you guys made from The Witcher 3?
Stan Just: If you like real time strategies and dark fantasy settings you will most likely very much enjoy playing Gord. So make sure to wishlist!